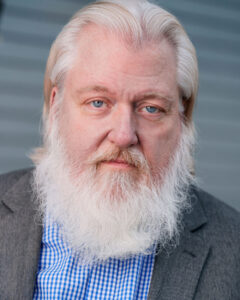 Michael Fletcher is a writer, actor, and graphic artist from Richmond, Virginia.

Michael has over forty years of writing experience.  He is the former editor of Bearing Drift Magazine and and a contributing author at Bearing Drift. He has previously written for Richmond Bible Examiner, Richmond Pro-Life Examiner, and Richmond Performing Arts Examiner.  He has blogged at The Write Side of My Brain for over ten years. His book, How to Break into the Event Planning Business, was published by DreamJobsToGo and is now available upon request.

In June 2022, Michael released Cat and Pig: A Story of Friendship.  A true life story of Herbie and Quinn which he wrote and illustrated.

Michael’s experience is not limited to his writing.  He has spent over thirty years in politics and public policy with more than twenty-five years with the Commonwealth of Virginia.  He was previously Director of Meetings and Conventions for a national association of state legislators where he annually coordinated a White House briefing, an orientation for new state legislators and an annual meeting with over 2,000 attendees.

Since the premiere, Michael has returned to his novel Not Much to Talk About (working title).

Michael has a Bachelor of Arts Degree from Asbury University where he studied Communications Arts with minor concentrations in drama and music.  He holds a Certificate in Christian Education from Asbury Theological Seminary and a Biblical Training Certificate from the Christian Counseling and Training Center.

A former member of the Music and Fine Arts Ministry at West End Assembly of God for over eighteen years, Michael also served on the church's missions committee and directed the men’s cancer outreach.

He is a member of the Richmond Playwright's Forum and former Managing Director of Chamberlayne Actors Theatre,

Michael was appointed by Governor Bob McDonnell to serve a four-year term on the Virginia Board of Counseling.

Michael writes from the heart on all things pertaining to life, family, history, faith, and occasionally politics.